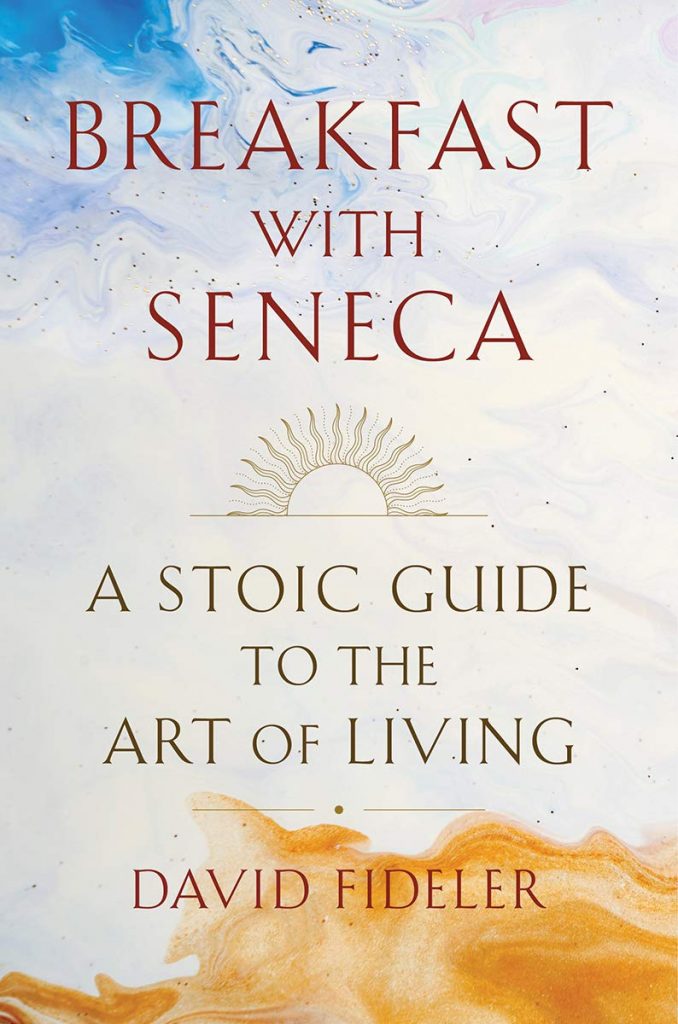 Selected as one of the best nonfiction books of the year by the editors at Amazon.

“The most companionable of the new Stoic books.” — NEW YORK TIMES

Breakfast with Seneca: A Stoic Guide to the Art of Living

The first clear and faithful guide to the timeless, practical teachings of the Stoic philosopher Seneca.

Stoicism, the most influential philosophy of the Roman Empire, offers refreshingly modern ways to strengthen our inner character in the face of an unpredictable world. Widely recognized as the most talented and humane writer of the Stoic tradition, Seneca teaches us to live with freedom and purpose. His most enduring work, over a hundred “Letters from a Stoic” written to a close friend, explains how to handle adversity; overcome grief, anxiety, and anger; transform setbacks into opportunities for growth; and recognize the true nature of friendship.

In Breakfast with Seneca, philosopher David Fideler mines Seneca’s classic works in a series of focused chapters, clearly explaining Seneca’s ideas without oversimplifying them. Best enjoyed as a daily ritual, like an energizing cup of coffee, Seneca’s wisdom provides us with a steady stream of time-tested advice about the human condition—which, as it turns out, hasn’t changed much over the past two thousand years.

Introduction: A Life That Is Truly Worth Living

1. The Lost Art of Friendship

3. How to Overcome Worry and Anxiety

4. The Problem with Anger

5.  Wherever You Go, There You Are: You Can’t Escape Yourself

6. How to Tame Adversity

7. Why You Should Never Complain

8.  The Battle against Fortune: How to Survive Poverty and Extreme Wealth

9. Vicious Crowds and the Ties That Bind

10. How to Be Authentic and Contribute to Society

11. Living Fully Regardless of Death

Advance Praise for this Book

You’ll feel as if you’re joining David Fideler to breakfast with Seneca while discussing his philosophical letters. It’s a great introduction to both Seneca and Stoicism, and will even help those already familiar with these writings to gain more benefit from them.

— Donald Robertson, author of How to Think Like a Roman Emperor

This book is the perfect antidote to the commercialism and superficial values of modern times. Although Seneca was living two thousand years ago, he speaks directly to us today. David Fideler breaks Seneca’s teachings down into easily comprehensible chunks and is concerned throughout to stress the practical, therapeutic aspects: how to deal with grief; how to be in the present moment; how to live a good life whatever the circumstances. He channels Seneca without distortion and makes him accessible to the twenty-first-century reader.

What the world needs now, more than ever, is fellow feeling, authentic community, and artful living. But how to achieve this tall order? David Fideler applies the wisdom of Seneca to show us the way. A feast for the soul and spirit, those who absorb the lessons in Breakfast with Seneca will embark on a life more worth living, liberating their minds and hearts and setting an inspirational stage for generations to come.

I have lately noticed that when I find myself in a tight spot, I take a philosophical short-cut and simply ask, “What would Seneca do?” David Fideler’s wonderful Breakfast with Seneca will come in handy in such situations. Besides being an accessible introduction to Stoic practice and to the Stoic philosophy in general, the book is full of advice from Seneca, often in his own words, on how to cope with life’s challenges.

— William B. Irvine, author of A Guide to the Good LIfe and The Stoic Challenge

This is a fine guide to Seneca, Stoicism, and what it means to live a Stoic life. As David Fideler unquestionably shows, Seneca’s advice is a relevant and useful today as it was when it was first written almost two thousand years ago. Highly readable, Breakfast with Seneca not only explains key Stoic ideas but also shows how to incorporate them into one’s own life.

What can we possibly learn from a sickly, two-thousand-year-old Roman philosopher? Quite a lot, it turns out, as David Fideler demonstrates so convincingly in Breakfast with Seneca. Seneca is the Stoic philosopher everyone has heard of, sort of, but few really know. Fideler enlightens us, and in a wonderfully simple and honest style that mirrors that of his subject. This is a rare gem of a book: simultaneously comforting and challenging, edifying and entertaining. Reading Breakfast with Seneca is like sitting down for a good cup of coffee with a wise and compassionate friend.

Ancient Roman Stoic philosopher Seneca was “a profound thinker who possessed a much deeper and more satisfying vision of human life than we are encouraged to hold by society today,” writes David Fideler in this comprehensive guide to the philosopher’s ideas. . . . [He] breaks down the eight core teachings of Stoicism, which include living in agreement with nature and accepting virtue as the only true good, and then digs into Seneca’s approach specifically. . . . Fideler keeps things accessible and offers plenty of real-world examples for applying philosophy to one’s life, making for a great crash course.

David Fideler is a writer, philosopher, and the editor of the Stoic Insights website. Born in the United States, he currently lives in Sarajevo with his wife and son.

Also available as an audiobook.

Featuring all-new translations of Seneca
and the Stoic writers.